Bihar School Examination Board on 06/06/2018 has been announced the class 12th (Intermediate) examination results for Science/Arts/Commerce Stream same day. As like previous year, BSEB Inter Result come in light due to poor performance rate by the students in the Board examination. What is the cause of it IS marking pattern or students performance or digitizing OMR Sheet and Marks sheet?. Whatever the cause but this year it is pretty sure about the OMR Marking by Digital method. There is no such mistake in this. Anyway, this year students are claiming about the marking in the Theory.

Students are claiming that results are not a good as they expecting and worked hard for the study to obtain good marks in the board exam of Class 12th, As per students view answer in copy has not evaluated as they should. Some of the students who appeared in the examination and after checked out their results has claimed for it about there marking as below described.

Another claim is from Muzaffarpur by Rajan Kumar complained that. He scored 79 in Physics, 69 in RB Hindi and He also posses 4000 ranks in JEE (Main) Entrance level exam for UG course by CBSE. Is Possible to Score only 4 marks in Chemistry theory. BSEB pushed by Carrier in Dark.

A mistake in Bihar Board 12th/Inter Result

By your self, you can check the one results of intermediate science stream students who got 38 marks in theory, in which subject there are total marks in theory 35 marks. Is possible to score 3 marks more than full marks. I think you will not be believed it but it is true check by your self. 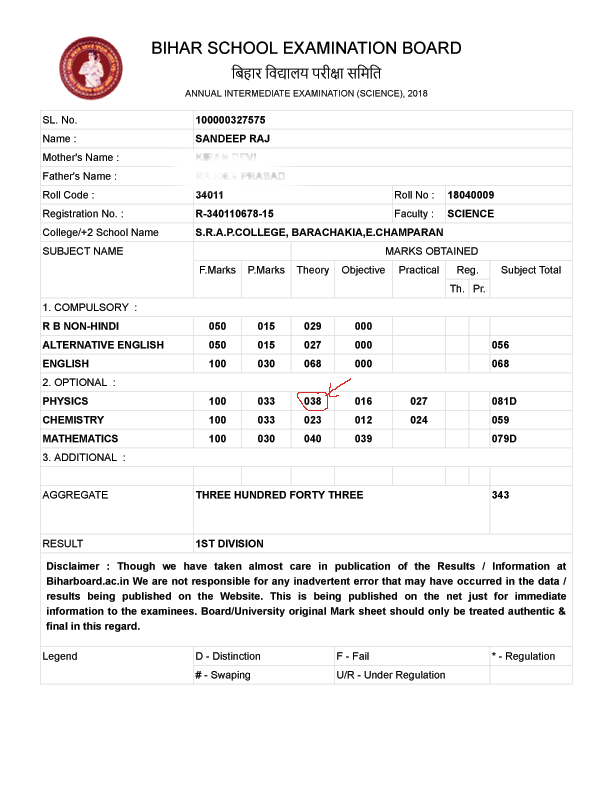 Above result is not a mistake because the student has appeared in the exam as improvement and previous year exam was theory and objective of 70 marks combine.  It’s a back year exam result. For more clarification read BSEB notification dated on 11/06/2018.